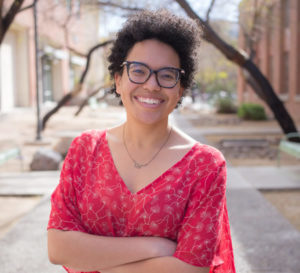 Symone Whitney Banks is a member of the University of Arizona speech-language pathology (M.S.) class of 2020. A native of Phoenix, she moved to Tucson to obtain her bachelor’s degree. While she was in college, her 8-year-old cousin was diagnosed with a profound hearing loss after years of misdiagnoses. That experience led Symone Whitney to discover the field of communication sciences and disorders. As a graduate student, Symone Whitney has been conducting research under the guidance of her advisor, Dr. Meghan Darling-White. The purpose of her research is to improve intelligibility in children with dysarthria, including children with Cerebral palsy and Down syndrome. Specifically, Symone Whitney is examining which treatment cues (e.g., “strong voice” or “big mouth”) are likely to best facilitate clear speech. In addition to her research, Symone Whitney is an officer in the Underrepresented Student Club in Speech, Language, and Hearing Sciences. The purpose of this student group is to provide an outlet for minority undergraduate and graduate students in communication sciences, to provide peer mentors, and to raise awareness about the need for diversity in the field. On the topic of graduate school, Symone Whitney has found managing her time and balancing her studies, research, and clinical work to be challenging. The most rewarding aspect of her graduate experience has been the support of a great cohort. For future (or current) residents of Tucson, she recommends grabbing an Eegee’s and enjoying it while walking along the Rillito River path. Advice she offers to students is to “Relax [and] don’t feel that everything has to be perfect the first time around. [We’re] in school to learn and to make improvements.” She also recommends seeking the guidance of a good advisor. 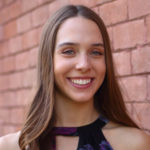 Ariel is currently a second year graduate student at The University of Arizona. Upon graduation, Ariel hopes to complete her clinical fellowship with medically fragile children as her long term career goal is to work in a children’s hospital. Ariel’s special interests include pediatric feeding/dysphagia, tracheostomy/ventilation, traumatic brain injury, and craniofacial anomalies. 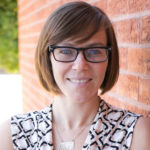 Hannah is currently a second year graduate student at the University of Arizona. She plans on becoming a medical SLP as she enjoys working in the areas of dysphagia and adult language and cognition. Has also has an interest in bilingual language development and is working on a project aimed at documenting common errors made by typically developing children during a story retell task. Hannah’s advice to future graduate students is to seek funding via graduate assistantships in-house and in other departments such as Spanish, psychology, or student services. 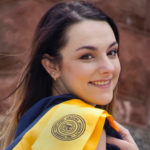 Shelby is currently a second year graduate student at Northern Arizona University. Upon graduation, she hopes to complete her clinical fellowship in early intervention and/or with children and adults with developmental disabilities. She also has an interest in pediatric dysphagia and is currently working on developing a protocol for assessing feeding and swallowing challenges in the schools. Shelby’s advice to future graduate students is to keep an open mind. Be open to new experiences and learning as much as you can about this extraordinarily diverse field. Try new things, even if you think you know exactly what setting and population you want to work with once you graduate! 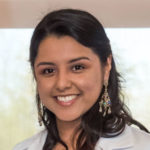 Cindy is currently a second year graduate student at A.T. Still University. She plans on becoming an audiologist as she enjoys working with both adults and pediatrics. She has a strong interest in vestibular disorders among children and adults with developmental delays, cognitive deficits, psychiatric disorders, or genetic disorders. It is important to be open minded throughout graduate school due to all the possible opportunities that may arise! She enjoys going on missions trips and giving back to the WORLD!

Sydney is a second year undergraduate student at Arizona State University. She plans on becoming a Speech Pathologist. Specifically, she enjoys working with individuals who have intellectual disabilities ranging from school age to young adults. She is excited to be a part of the current bilingual research being done at ASU, as is pursuing bilingual proficiency in Spanish. She is planning on using that skill in professional settings close to home and abroad. Sydney’s advice to others is to never underestimate the amazing things that can happen when you foster intentional relationships in your life.